Ahead of the official release of his fifth studio album dubbed ‘Anloga Junction’ on Friday, April, 24, he is already making some great strides.

The upcoming album has joined the likes of Alicia Keys’ ‘Alicia’, Gregory Portor’s ‘All Rise'( Delux) as the most pre-ordered albums worldwide on Apple Music.

This is certainly a ‘bossy’ move by the Boss Energy Drink owner and all his fans. 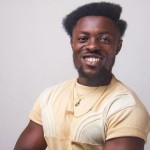 B I Weezy Biibiba ft Sarkodie

Sarkodie hangs out with Youtube Head of music, Lyor Cohen